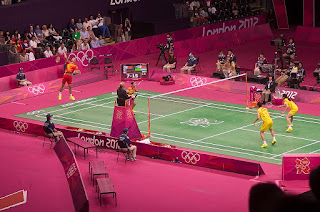 Badminton is a racquet sport played using racquets to hit a shuttlecock across a net. Although it may be played with larger teams, the most common forms of the game are "singles" (with one player per side) and "doubles" (with two players per side). Badminton is often played as a casual outdoor activity in a yard or on a beach; formal games are played on a rectangular indoor court. Points are scored by striking the shuttlecock with the racquet andlanding it within the opposing side's half of the court. Each side may only strike the shuttlecock once before it passes over the net. Play ends once the shuttlecock has struck the floor or if a fault has been called by the umpire, service judge, or (in their absence) the opposing side.{1}The shuttlecock is a feathered or (in informal matches) plastic projectile which flies differently from the balls used in many other sports. In particular, the feathers create much higher drag, causing the shuttlecock to decelerate

more rapidly. Shuttlecocks also have a high top speed compared to the balls in other racquet sports. The flight of the shuttlecock gives the sport its distinctive nature. The game developed in British India from the earlier game of battledore and shuttlecock. European play came to be dominateby Denmark but the game has become very popular in Asia, with recent competitions dominated by China. Since 1992, badminton has been a Summer Olympic sport with four events: men's singles, women's singles, men's doubles, and women's doubles,{2} with mixed doubles added four years later. At high levels of play, the sport demands excellent fitness: players require aerobic stamina, agility, strength, speed, and precision. It is also a technical sport, requiring good motor coordination and the development of sophisticated racquet movements.{3} 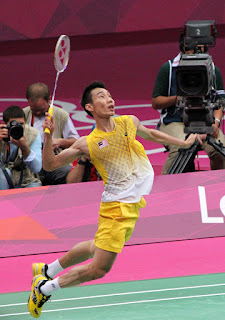 Games employing shuttlecocks have been played for centuries across Eurasia,[a] but the modern game of badminton developed in the mid-19th century among the British as a variant of the earlier game of

battledore and shuttlecock. ("Battledore" was an older term for "racquet".)[4] Its exact origin remains obscure. The name derives from the Duke of Beaufort's Badminton House in Gloucestershire,{5} but why orwhen remains unclear. As early as 1860, a London toy dealer named Isaac Spratt published a booklet entitled Badminton Battledore – A New Game, but no copy is known to have survived.{6} An 1863 article in The Cornhill Magazine describes badminton as "battledore and shuttlecock pla The game may have originally developed among expatriate officers in British India,[8] where it was very popular by the 1870s.[6] Ball badminton, a form of the game played with a wool ball instead of a

officers returning home had started a badminton club in Folkestone. Initially, the sport was played with sides ranging from 1 to 4 players, but it was quickly established that games between two or four

competitors worked the best.{4} The shuttlecocks were coated with India rubber and, in outdoor play, sometimes weighted with lead.[4} Although the depth of the net was of no consequence, it was preferred that it should reach the ground. {4}